Welcome to the All-Ireland Cycling Without Age website. For other countries please go to cyclingwithoutage.ie. 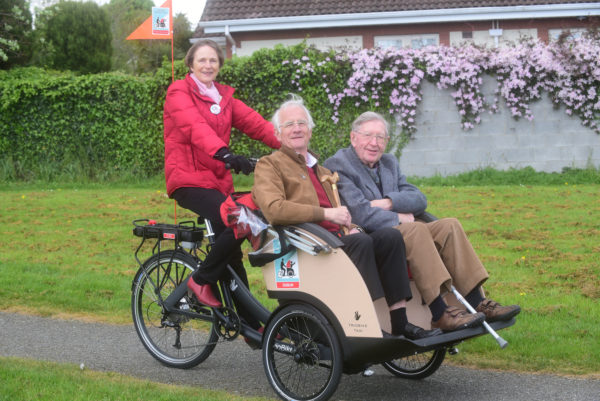 Clara Clark,  founder of CWA in Ireland and a Cycling Without Age pilot with passengers Charles Mollan, left, and John O’Keeffe taking a spin in their local park in Blackrock Co. Dublin. Photograph Moya Nolan

We begin the journey, and the story of Cycling Without Age, in Ireland: the first rickshaw arrived in Blackrock, Dublin in March 2017, just in time for the Dublin St. Patrick’s Day Parade. Since then, we have been demonstrating it to nursing homes and sponsors and spreading the word, with great response. Clara & Charles will continue to promote and explain the CWA concept until we get people to take up this brilliant initiative.

Cycling Without Age Dublin won an award from the Social Entrepreneurs Ireland Academy!

Want to start in Ireland?

Starting a chapter in your local community

If you would like to start a chapter of Cycling Without Age in your city or area, we would be delighted to help you get started.

Getting started with a Cycling Without Age chapter is an amazing experience. Nothing beats witnessing the joy of the older or mobility-impaired people, the pilots and personnel interact on and around the trishaw and seeing the smiles of passengers coming back from their first ride with the wind in their hair, rosy cheeks and full of stories. We love to experience the movement of Cycling Without Age spreading all over the world and always welcome more to join.

We have launched an affiliate model for communities, nursing homes and cities worldwide to become part of the movement. Proceed to the affiliate page or if you have any questions, write us an email. We already have a wealth of experience in working with nursing home staff and management, city councils, other volunteer organisations, cyclists federations as well as great ideas of how to get the initiative off the ground and locals excited about it.

From 13th June 2017 to 18 Feb 2020: We now have 31 trishaws operating in different parts of Ireland. What a great way to celebrate our progress two years on! Six of these bikes have been sponsored by companies, coming on board to support the voluntary initiative using their CSR (corporate social responsibility) budgets. Another twelve bikes have been grant-aided by Healthy Ireland, part of the Dept. of Health initiative, via Local Sports Partnerships and local Councils or the HSE.

Find out how it started in Copenhagen

Just one happy story of one trishaw in Dublin…

On behalf of myself, the residents and families that have taken trips out with the volunteers and myself we want to say a sincere thank you to you all for your support, sponsorship, guidance and good humour. See the link below to a lovely story… The trishaw has brought so many opportunities for our residents that they just would never have had without it. I took a spin out yesterday with a lady and her niece, she has significant issues and usually spends long periods of the day in bed.  Yesterday was the first time she agreed to leave the unit in months and she opened up like a flower when we cycled thought the tree lined streets of Dublin 8 and around the area she used to live in. This project is making a real difference to our resident’s quality of life. Kind regards and looking forward to many more adventures. 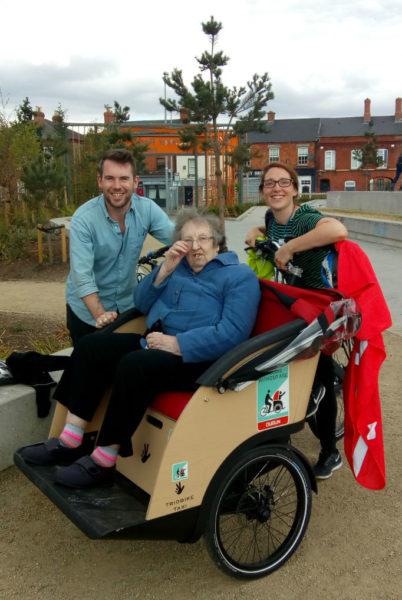 Betty with Ed and Aoifehttps://www.hse.ie/eng/about/our-health-service/making-it-better/trishaw-bike-brings-joy-to-residents-of-belvilla-community-unit1.html